Getting charged with a crime is often one of the most harrowing, stressful, and scary events a person can face in their life. A criminal conviction can have long and far reaching impact. It is imperative that you understand your rights and make an informed choice for who will be your voice in the courtroom. The following information is provided to help you better understand the criminal court process in North Carolina. We hope you will consider contacting our firm to assist you in your time of need.

Generally speaking, criminal charges in North Carolina are broken into two main categories: Misdemeanors and Felonies. These are further divided into classes based on the severity of the crime, and the proscribed punishment for each crime.

Misdemeanors are generally considered “low level” offenses, but do not be misled, misdemeanors are serious business. A conviction for a misdemeanor will go on your criminal record and subject you to punishment as determined by a judge and North Carolina's structured sentencing guidelines. Further, a criminal conviction can impact you outside of the court system. Many applications, from jobs to schooling to credit, will ask about prior criminal convictions.

Class A1 (most serious misdemeanors): Assault on a Government Official, Assault on a Female, Assault on a Handicapped Person, Assault on a Child under 12 years of age, Assault by pointing a gun, Sexual Battery, Child Abuse, Stalking, Violation of Domestic Violence Protective Order, Misdemeanor death by motor vehicle, Interference with an Emergency Device

Class 1: Injury to Personal Property, Injury to Real Property, Armed to the terror of the public, False Imprisonment, Misdemeanor Breaking and Entering, Larceny (under $1,000), Secret Peeping, Communicating Threats, Contributing to the Delinquency of a minor, Animal Cruelty, Carrying Concealed Weapon into Establishment selling alcohol, Sell/Give/Aid and Abet providing alcohol to underage person, Possession of alcohol under age 19, Possession of unspecified controlled substance, Possession of Marijuana above ½ ounce but less than 1 ½ ounce, Possession of non-Marijuana Drug Paraphernalia

Historically, Felonies were considered the most serious offenses and were punished accordingly. Felonies are still very serious and can have lifelong ramifications upon a conviction. One example is felons cannot own or possess a firearm. Should you find yourself or a loved one facing a felony charge, it is important to be aggressive in in your defense; don't delay! Call our office for a no-cost case analysis.

Felonies are classified from most serious (Class A) to least serious (Class I). What follows are some common felonies, organized by class. Again, please note, this is not an exhaustive list of all felonies in North Carolina. It will, however, give you an idea of how felony classes work.

Class B2: Second-Degree Murder (no malice but inherently dangerous OR proximately caused by unlawful distribution of opioid)

Class I becomes a Class E

Special rules apply for the timing requirements of the underlying felony convictions for qualification as a habitual felon. Further, there are other sentence enhancements that could apply depending on the charge and the Defendant's background, such as violent habitual felon or habitual misdemeanors. Long story short, this stuff can be confusing and can make all the difference in sentencing, should the Defendant be convicted. The felony sentencing chart below helps illustrate the ranges of punishment for North Carolina felonies. 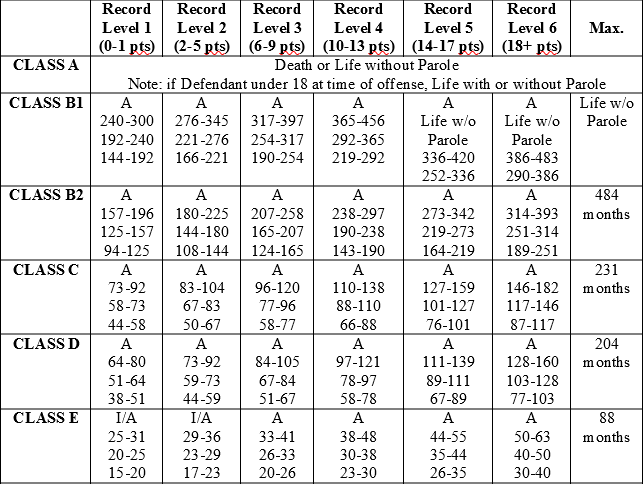 *Note: the numbers in the chart are the minimum number of months*
*Note: the top line is aggravated range, the middle line is presumptive range, and the bottom line is mitigated range - aggravating and mitigating factors listed by statute*
*Note: there are special sentencing rules for Sex Offenses and Trafficking Charges*

Thank you for contacting us. We will get back to you shortly.

Please complete all required fields below.